Resort known for its champagne powder — and for embracing families

Steamboat, known for having more U.S. Olympians — 79, including 17 from the 2010 Vancouver Olympic Games — than any other American town. 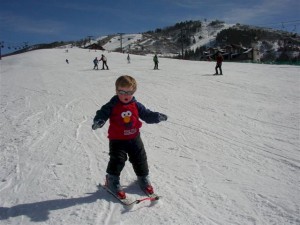 While other resorts have adapted various aspects, Steamboat has morphed to include kids rent-gear-free, Kids Ski Free has put the town on the map as family central, which could add up to savings of hundreds of dollars a child for a five-day trip. Teens up to 18 get a break on lift tickets, too, as do skiing grandparents. No wonder families remain at the core of the resort’s business.

Steamboat is chosen repeatedly because the resort is known for its champagne powder — more than 400 inches of snow a year — its new Kids Vacation Center (now doubled in size) for five and seven year olds, plenty of terrain for such a varied group of snowboarders (lower intermediate) and skiers (expert), as well as non-skiers (they plan to snowshoe). Parents will like that there are lifts just for the terrain parks — look for 30 new and refurbished features, designed for different levels, on the four progressive parks so teens can “lap” the parks easily and safely.

Condos in Steamboat, a small property management company, offer many choices of kid friendly accommodations. From budget to luxury, from ski-in condos with pools & hot tubs and private shuttle services. All our units have snow sleds and some have snow ball & igloo making equipment because we know the fun doesn’t have to stop once the slopes close.

It seems that once families discover Steamboat — there are direct flights from nine major cities across the country — they return again and again. More than 60 percent of families are repeat customers.

Condos in Steamboat owners, Kim & Dan Filler, have lived in Steamboat since 1983. Their 5 yr old son, Jake, has been on skis since he was 23 months old.  The entire Filler Family looks forward to 2010 / 2011 ski season.  They are currently offering  20% off lodging and 20% off lift tickets & Kids Ski Free.