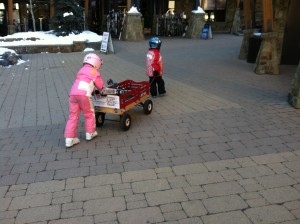 Summer may still be in full swing here in Steamboat, but this week the ski area had us all talking about winter. An announcement was made detailing major capital improvements for the coming season. We thought we’d share the news with our friends at Condos in Steamboat.
Snowmaking abilities will be leading the way in this season’s biggest changes. The current system will be extended by two miles incorporating See Me, Upper See Ta, Sitz, the upper part of Vogue to Jess’s Cutoff and from Sitz to Boulevard. If this all sounds like double dutch, then you’ll just have to come and see for yourself. Just don’t hang about as the resort will have an opportunity to make a lot more snow early season.
Said to be the first of its kind in Colorado a new Bison Sherpa winch will be added to their fleet of grooming machinery. The ski area operates 21 machines to groom over 600 acres of terrain a night. The Sherpa will be used on the steepest slopes and Terrain Park.
For the undecided on a powder morning, up to six new cameras are being installed on the mountain allowing skiers to get a sneak peak on conditions.
Night skiing has increased to Thursdays through Monday with an extended spring schedule.
After a day on the hill après ski mountainside just got a little cozier. Bear River BBQ at the base will be getting a new outdoor heating and lighting system allowing extended hours of al fresco dining options. Thunderhead’s Red Bar is also in for an expansion.

While we aren’t ready to swap our bikes for skis yet, it’s certainly looking like we’ll be getting off to a snowy start when the time comes.

« GENTLE HIKES THAT PACK A SCENIC PUNCH
WHAT DO YOU GET WHEN YOU CROSS AN ACROBATIC PILOT, A RAGING BULL AND A JALAPENO? »
hosted by mlcmultimedia