Trivia Question 6 Who straps 200 lights and wears a backpack of fireworks before skiing down Howelson Hill for one night every February? 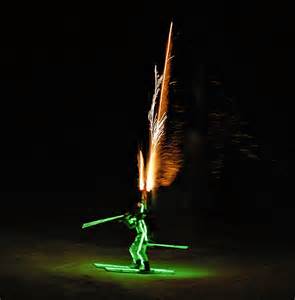 The Lighted Man – the most anticipated performance in the Steamboat Springs Winter Sports Club Carnival. Claudius Banks the original lighted man started the tradition in 1936 after persuading the Club to let him ski with 100 pounds of battery operated lights and roman candles. A tinkerer by nature with a passion for pyrotechnics his gear evolved over time becoming more and more elaborate. After his last appearance in 1978 he handed the torch to son Jon who continues in his father’s footsteps.