There’s a moose on a loose 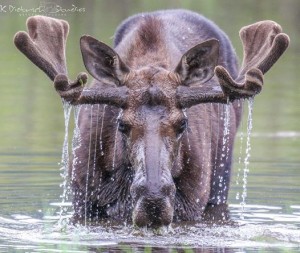 Moose may have been increasingly roaming this countryside for some time now, but until recently they’ve been keeping their distance. A recent spate of hostile encounters between the sizable beasts and us mere humans have certainly got us on our toes. While Moose are generally fine to observe from a safe distance, it is crucial to remain mindful when in their company. Condos in Steamboat would like to share a few cautionary tips to keep up your sleeve on the off chance you get a front row seat at the next Moose showing.
What can you do to remain safe?
• Do not approach.
• Give them plenty of space.
• Moose often will not move out of the trail so you may need to turn around or go off trail to get around them.
• Quickly get something between you and the moose, such as a tree.
• Keep your dog close to avoid having her irritate the moose, and to prevent the moose from kicking her.
• If you find yourself on the ground get up and run as quickly as possible.
Warning Signs the Moose may attack.
• Moving toward you
• Laying back its ears
• Making strange grunting noises
• Stomping or clawing the ground
• Swinging its head back and forth.
As tempting as it may be to head home from your Steamboat vacation with a memorable snapshot of you and that Moose encountered, don’t even think about it. They are recognized for their aggression over anything else around here. Like famous saying goes “Look but don’t touch”.

« Schools Out
ET’s coming to Steamboat! »
hosted by mlcmultimedia