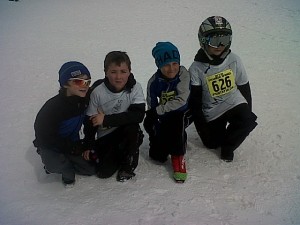 Routt County was once noted as the thinnest county in the country, so it’s no surprise the community is awash with athletes. Nurturing the competitive spirit from early on is commonplace in this town. Last weekend, on a snowy Saturday morning 270 participants took part in the 22nd Annual Steamboat Pentathlon. It was the largest field in the history of the event and here to share their experience are first timers The Fast Maniacs.

What made you want to enter?

The Fryers (Dad Darrin was 3rd overall in 2012), wanted to compete as a family but couldn’t find a category, so over dinner with the Dorris family it was suggested the boys make their own team. They jumped at the chance, especially Tate whose lucky number is 22 – it was the 22nd year of the event! 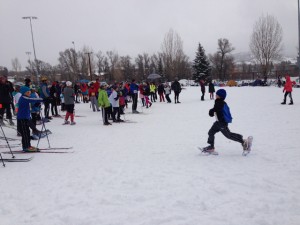 Run up and ski down, plus the final run was Quinn. Snowshoe was Jaxon, Skate ski, Jaydon and bike, Tate.

What was the best part of doing the event?

They all agreed camaraderie and team work, being with our buddies and having fun. Competitive Quinn also found running to be the best part.

What did the Fast Maniacs find the most challenging?

Training was for sure the hardest part. Darrin took them on several training sessions but until they were actually competing some of the specifics on rules were hard to explain ahead of time.

Tate thought his legs and throat might “fall off” after the bike leg, and Quinn found running uphill in ski boots his biggest challenge. 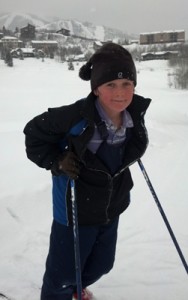 Will you enter again next year?

Jaydon wants to go solo, after asking Darrin to try out the whole course the very next day.
Jaxon is up for it again and hopes to be part of a duo or team
Tate is like Jaxon and plans on being in a team again.
Quinn will be giving Jaydon a run for his money by also going solo.

What is the best part of growing up in this town?

Jaydon – snow and great mountains to bike on
Jaxon – Skiing and biking
Tate – you can ski and have a great ski mountain, and it’s fun to live in Steamboat. Ice hockey and street hockey.
Quinn – Playing hockey

When not competing in races or attending school together the Fast Maniacs can be found together skiing, skating, camping, biking, swimming and hanging out having fun.

Hmm, and people wonder why we are the most athletic county in the nation??