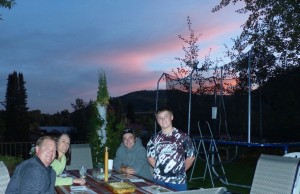 Things are about to get crazier than normal this winter for Dan and Kim Filler, and they couldn’t be happier about it. For nearly two decades the Fillers have owned and operated Condos in Steamboat, specializing in vacation rentals. Winter season means two things to them: looking after clients, and running back and forth to Howelsen Ice Arena to support their hockey mad son Jake.

This year they have even more reason to be at the rink cheering at a hockey game. The Fillers opted to become a host family for the first-ever junior hockey team to be permanently stationed in Steamboat Springs – The Steamboat Wranglers.

In August Quinny Baker switched coastal California for the Rocky Mountains and moved into the Fillers. It will be his home away from home for the next eight months. The senior in High School is part of a new team that will train players hoping to make college teams.

Up to 25 players hope to be billeted in Steamboat and play for the newest team in the western division. Players have strict guidelines to adhere to, including evening curfews which hold serious consequences if broken. 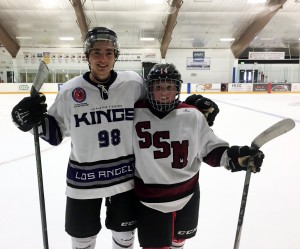 The Fillers became aware of the new team at Howelsen Ice Arena and volunteered their support. Kim entered the contest to name the team and her quintessential Steamboat term – The Wranglers – won. She will drop the first puck when the team plays their first game, this Friday, September 30th, 2016 at 7pm.

“We are looking forward to meeting and accommodating as many of the traveling families as possible,” Kim says. Eleven-year-old Jake is years away from playing at the same level, but he has set his sights on hockey. Having a big brother figure at home to show him the ropes is a good thing. He was equally thrilled to earn a spot as one of two stick boys.

“Our business is to take care of people coming to Steamboat, but this time we are taking it to the next level. I wanted to pay it forward, knowing one day it could be our son doing the same as Quinny.”

Quinny Baker and his teammates can be sure of one thing this winter, they might be far from home but they’ll be plenty of people cheering them on at Howelsen Ice Arena, especially the Fillers.