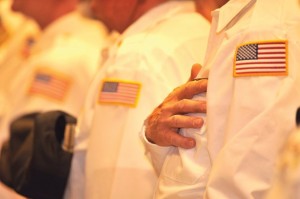 In May Steamboat Springs was named the “Most Veterans Friendly Little City in Colorado. Steamboat Pilot and Today reporter Scott Franz gave an insight into what that means to the community, and in honor of Veterans Day we wanted to share his story.

Steamboat Springs — The honor was bestowed on the city by the Employer Support of the Guard and Reserve, or ESGR.

“This is something I think is a great honor that the city of Steamboat Springs deserves that recognizes all of the veterans in the Steamboat area and even throughout Routt County,” said Jim Stanko, ESGR area chairman. “We really have a tremendous tradition here in Steamboat Springs, and a lot of people don’t realize it.”

Stanko said the award will make more people aware of the contributions many local veterans have made to “make this valley the place we all love and want to live in.”

Perry-Smith, 91, served in the 10th Mountain Division during WWII and fought in Italy.

After the city made the proclamation, Stanko talked about how generations of Routt County veterans became community and business leaders after they returned from duty.

Steamboat is the second city to earn the ESGR’s Most Veterans Friendly Little City award.

Dick Young, state chairman of the Employer Support of the Guard and Reserve, told the Steamboat Today last month that the city won the award for a number of reasons.

“It’s not any one big thing; it’s really the attitude of a lot people up there year round,” Young said. “They do a lot of good things, and to veterans, it’s pretty important. We thought Steamboat deserved this award.”

ESGR officials were on hand Tuesday evening to present the award to the city.

They also recognized Stanko for his work as area chairman for the ESGR.

Stanko also recognized Craig Kennedy, the program director for Steamboat Adaptive Recreational Sports, for the work he and his organization have done for Wounded Warriors and other veterans with disabilities.