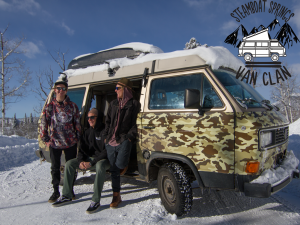 What do three Steamboat Springs boys with a passion for skiing do in their final year of High School when the snow keeps falling? They graduate early, get in a van and chase the powder of course. That’s exactly what Jack Vanderbeek (JV), Nick Simon and Mathew White decided to do – and they’ve just rolled out of town.

The trio has been ski racing their whole lives, and over recent years, they’ve developed a passion for big mountain competitions. They’ve entered six competitions between now and the end of March, taking them from the Sangre de Christo Mountains in New Mexico to the Columbia Mountains in British Columbia.

In order to minimize costs, they are living out of a 1986 Volkswagen Vanagon, owned by JV’s dad. The vehicle has been refitted with a 2.5 liter Subaru engine and insulated walls.

Armed with a video camera, they are planning to make a documentary of their travels shooting what they believe will be “some of the best skiing in the western half of North America.”

The trio will be carving turns on locally produced Harvest Skis using Grass Sticks poles – both companies agreed to sponsor the boys, or Van Clan, as they’ve been dubbed.

Keep up to date following the Van Clan on www.vanclanblog.blogspot.com